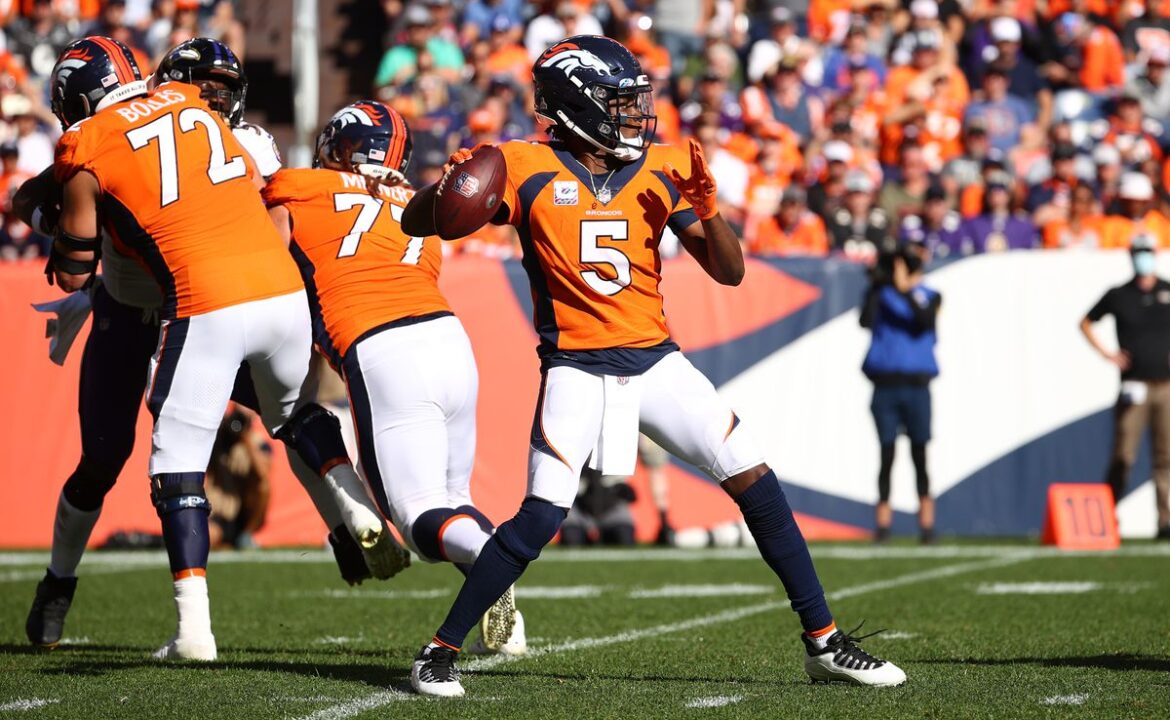 This week’s Broncos game at Empower Field features two teams who will have to fight against a letdown game.

The Lions, battling for their first win of the season, finally got it last week when Jared Goff threw a touchdown in the final seconds to upset the Vikings and end Detroit’s 364-day winless streak. But now that they have a win, what do the Lions have to play for?

In truth, nothing. Draft position for 2022 is more important than wins at this point. Although, don’t tell that to head coach Dan Campbell.

As for the Broncos, last week’s game at Kansas City was the biggest for the franchise since Super Bowl 50. First place was on the line, and six years of losing to the Chiefs was at stake.

The problem with hyping a game to that magnitude is that a big fall comes with failure. Losing 22-9 was deflating, and can Denver gather itself together and prevent the hangover from leading to a two-game losing streak?

The Lions were always better than their winless record showed. Five of their two losses were by one score, and three were by a field goal. Detroit was a bad call and a record-breaking field goal away from beating Baltimore.

As the Lions turn to the remaining four games of their season, it’s about evaluating who is going to remain with this team in 2022. They require a full teardown, with the exception of D’Andre Swift, the biggest star of the offense. Although Swift didn’t play last week, and his status is in doubt for this game in Denver.

Against a superior secondary like Denver’s, Detroit needs to be able to run. So Swift’s availability is critical for the Lions if they have any hope of winning.

It was disappointing to see Teddy Bridgewater and the offense struggle so mightily against the Chiefs. Most of the criticism is coming at offensive coordinator Pat Shurmur, who Broncos fans want to see gone. There is more sympathy for Bridgewater, but it’s been pointed out this week that Jerry Jeudy’s current tally of zero touchdowns this season is a Bridgewater problem and evidence that a change at quarterback must be made.

Rumors of an offseason trade have heated up, with Russell Wilson saying that the Broncos are on the shortlist of teams for which he’d waive his no-trade clause to join. Of course, the fans, and franchise, have been in love with Aaron Rodgers and haven’t given up on that crush either.

And there is a new love in Denver: Rookie running back Javonte Williams. He had a big game at Dallas, and then he had a bigger game against the Chiefs, rushing for 102 yards and catching passes for another 76.

A star is born in Williams, and even if Melvin Gordon returns this Sunday, look for Williams to be the featured back going forward. It’s clear the Broncos got a good one from North Carolina, and he is a back you can build an offense around.

He’s also got a lot to play for, and if there is a hangover this week for other players, there won’t be for Williams. He will make the difference on offense, and he will lead the Broncos to a 10-point win.

Only four of Detroit’s 12 NFL games have gone over, and only two of Denver’s 12 have hit the over. It’s a low line at 42.5 but stick with the streak. The Broncos have hit the UNDER in six straight games, and this week they make it seven.